The buzz is largely gone. And today’s situation END_OF_DOCUMENT_TOKEN_TO_BE_REPLACED

Psychedelics could be a game-changer for millions struggling END_OF_DOCUMENT_TOKEN_TO_BE_REPLACED

2 RETAIL STOCKS THAT TEND TO RALLY IN Q4

When the S&P 500 Index (SPX) is up 10% or more year-to-date through the end of September, then October tends to be a bearish month for U.S. stocks, per recent data from Schaeffer's Senior Quantitative Analyst Rocky White. However, several stocks tend to shine in the month of October -- including Kroger Co (NYSE:KR). Meanwhile, coffee chain Starbucks Corporation (NASDAQ:SBUX) stock has rallied into the new year for at least the past 10 years, topping our list of best stocks to own in the fourth quarter, historically.

Below is the list of the best SPX stocks to own in October, looking back 10 years. Kroger is one of only three equities with a 100% win rate, averaging a monthly gain of 5.43%, per data from White. 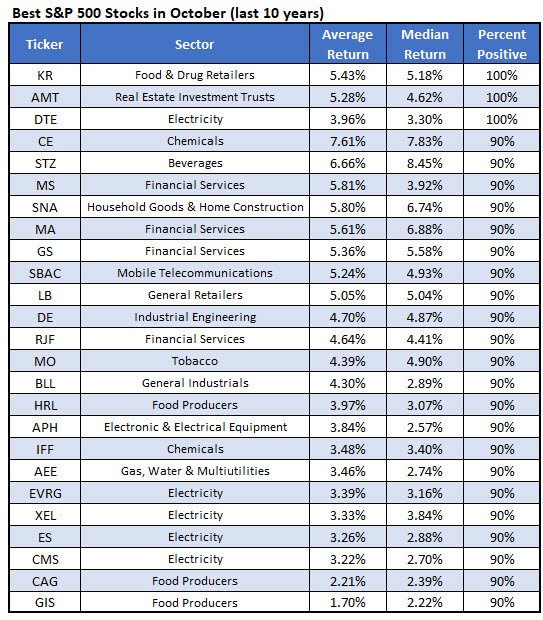 KR stock has already been on a tear since touching a nearly two-year low of $20.70 on July 23, adding nearly 25% in that timeframe. The equity was last seen up 0.2% at $25.80, but has recently stalled in the $26 area. This is where Kroger shares landed after a bear gap in the first quarter, and this level has acted as resistance ever since. In addition, KR is staring up at its formerly supportive 320-day moving average. However, another 5.43% jump from current levels next month would place the security around $27.20 -- north of both of these potential hurdles. 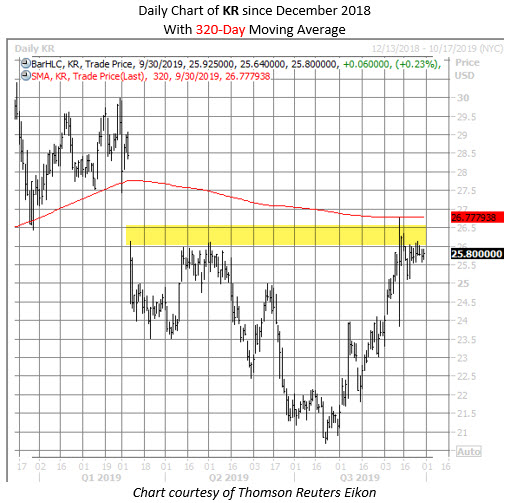 Should the grocery stock once again shine next month, analyst upgrades could be forthcoming. Despite the aforementioned surge off its July lows, Kroger shares boast just five "buy" or better endorsements, compared to 10 "hold" or worse recommendations.

Meanwhile, traders looking to speculate on KR's short-term trajectory should consider buying options. The equity's Schaeffer's Volatility Index (SVI) of 27% is higher than just 12% of all other readings from the past year, suggesting near-term option contracts are attractively priced at the moment, from a historical volatility standpoint.

STARBUCKS HAS RALLIED IN Q4 EACH OF THE PAST 10 YEARS

Moving on, Starbucks is one of only two SPX stocks that has moved higher every single fourth quarter over the past 10 years, as you can see by the list of best fourth-quarter stocks below. Specifically, SBUX has averaged a quarterly gain of 10.55%. 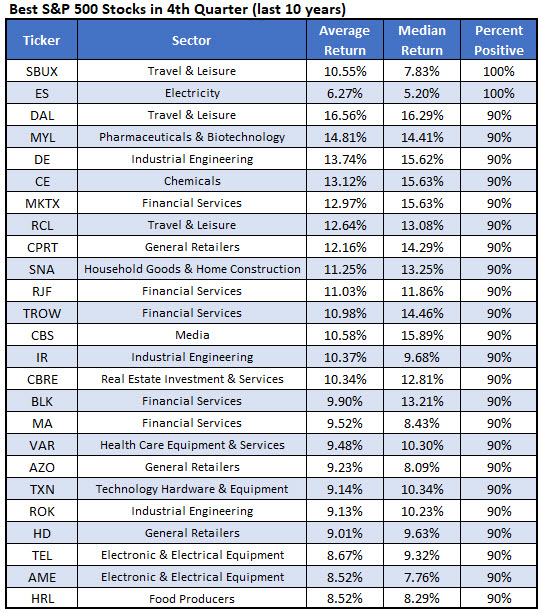 Starbucks stock has taken a breather since touching an all-time high of $99.72 in late July. However, the shares are testing their footing atop the 100-day moving average, and remain up more than 50% in the past year. From the equity's current perch at $87.81, another 10.55% surge would put SBUX back above $97 to start 2020. 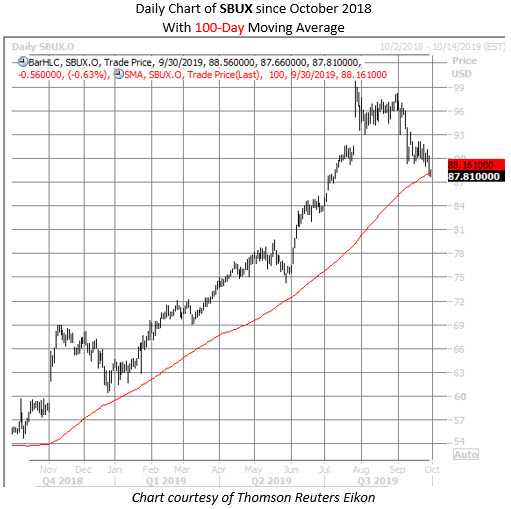 As with Kroger, a short-term rebound could fuel a round of upbeat analyst attention for SBUX. Although the shares remain in striking distance of record highs, 14 of 23 analysts maintain tepid "hold" recommendations. Plus, the consensus 12-month price target of $96.22 represents a premium of less than 10% to SBUX's current price, suggesting price-target hikes could also come amid another fourth-quarter jolt higher.