2 Oil Stocks Paying Dividends With Yields Of More Than 6%

In this low interest-rate environment, it’s difficult to find avenues where you can get higher yields. The best CD rates in October were around 2.25% for a one-year term, while the 10-year Treasury was offering 1.57%.

With those low rates, it’s natural for income-seeking investors to look somewhere else to earn higher returns and one area to look is the energy sector. When it comes to dividend yields, oil stocks generally beat the market. To explain why they offer generous yields — in some cases as high as 7% — investors should understand that they’re getting paid for the exposure they’re taking to highly volatile oil prices.

The recent example of this boom-and-bust cycle in energy markets was the deep slump in oil prices that started in 2014, after a remarkable run of the preceding decade in which crude oil prices traded even more than $100 a barrel.

But the 2014 downturn was so sharp and painful that it caused several oil producers to reduce or eliminate their dividend as prices plunged. Keeping these risks in mind, investors can still pick some bargains from the energy sector. Here are two candidates to consider for the yield-hungry investors:

Among the oil supermajors, it’s hard to ignore Royal Dutch Shell (NYSE:RDSa) when it comes to earning a hefty dividend. The company pays $0.94 a share quarterly dividend which translates into a 6.65% dividend yield on yesterday’s price.

The shares closed up about 1% at $57.26 yesterday. They're down about 2% so far this year, after a 45% jump since hitting the 2016 low. In the company’s latest strategy update in June, the Anglo-Dutch oil major is forecasting a much stronger cash generation over the coming years. That could mean the producer will be in a better position to hike its dividend, which it kept flat during the past four years. 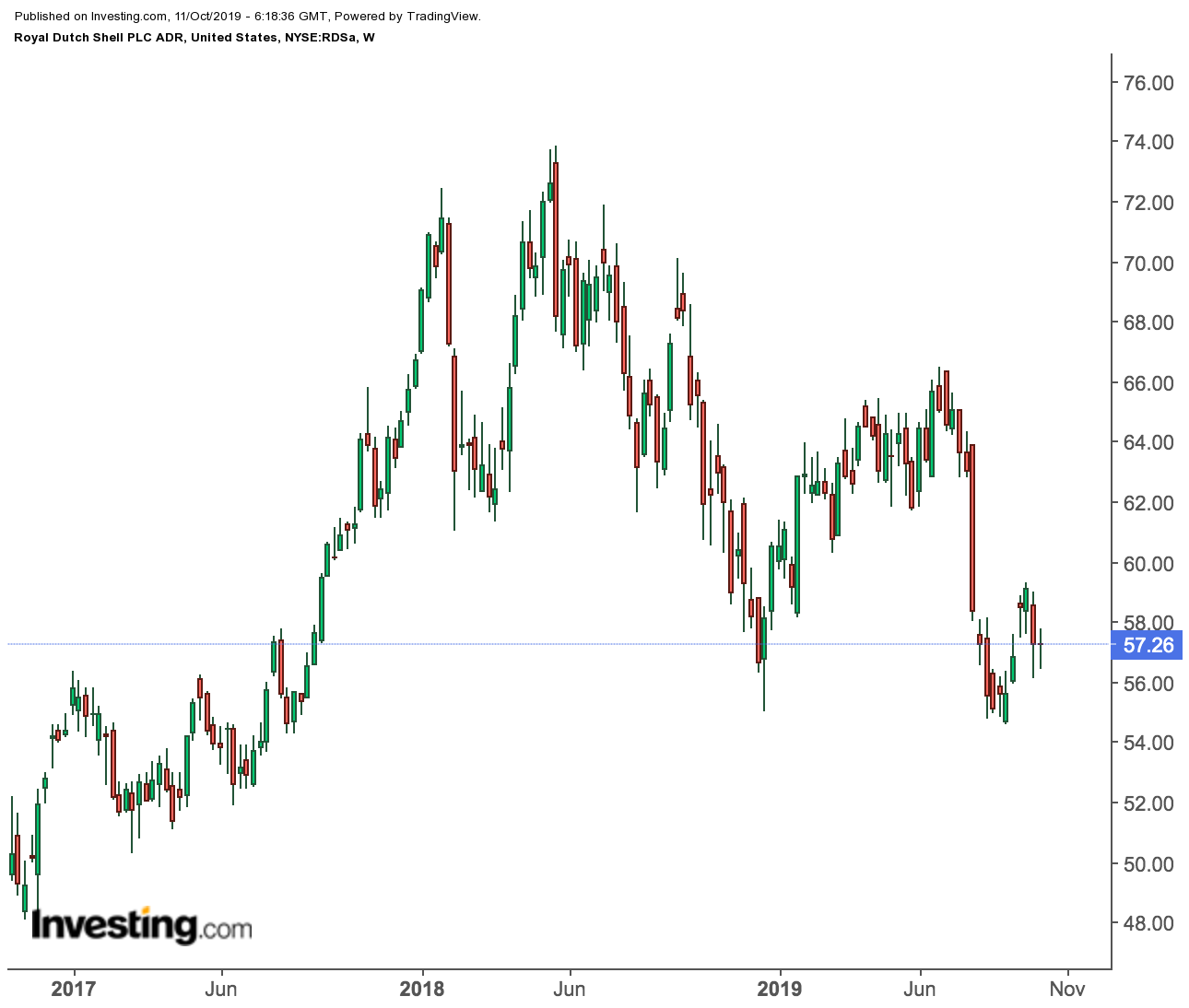 Shell says it has the potential to spend $125 billion on dividends and share repurchases between 2021 and 2025. The company paid $16 billion in annual dividend last year on top of the current buyback program that is averaging out just under $10 billion annually.

That forecast could prove optimistic, however, if the current downturn in oil prices persists. Shell stock underperformed after the 2014 oil slump as the company’s debt ballooned after its massive acquisition of BG Group. Since then, Shell has worked aggressively to cut its debt and has made returning cash to investors its priority.

In our view, Shell is much better-prepared this time to cope with a prolonged slide in oil prices thanks to the company’s aggressive debt reduction strategy, backed by its plans to sell assets worth $30 billion.

The London-based BP PLC (NYSE:BP) is another strong name when it comes to paying dividends. Its current yield is 6.62%, translating into quarterly payout of $0.615 a share. That payout has risen just 5% since 2014, showing the cash constraints this oil giant has faced since then. The shares are down 2% since the start of the year and closed at $37.16 yesterday. 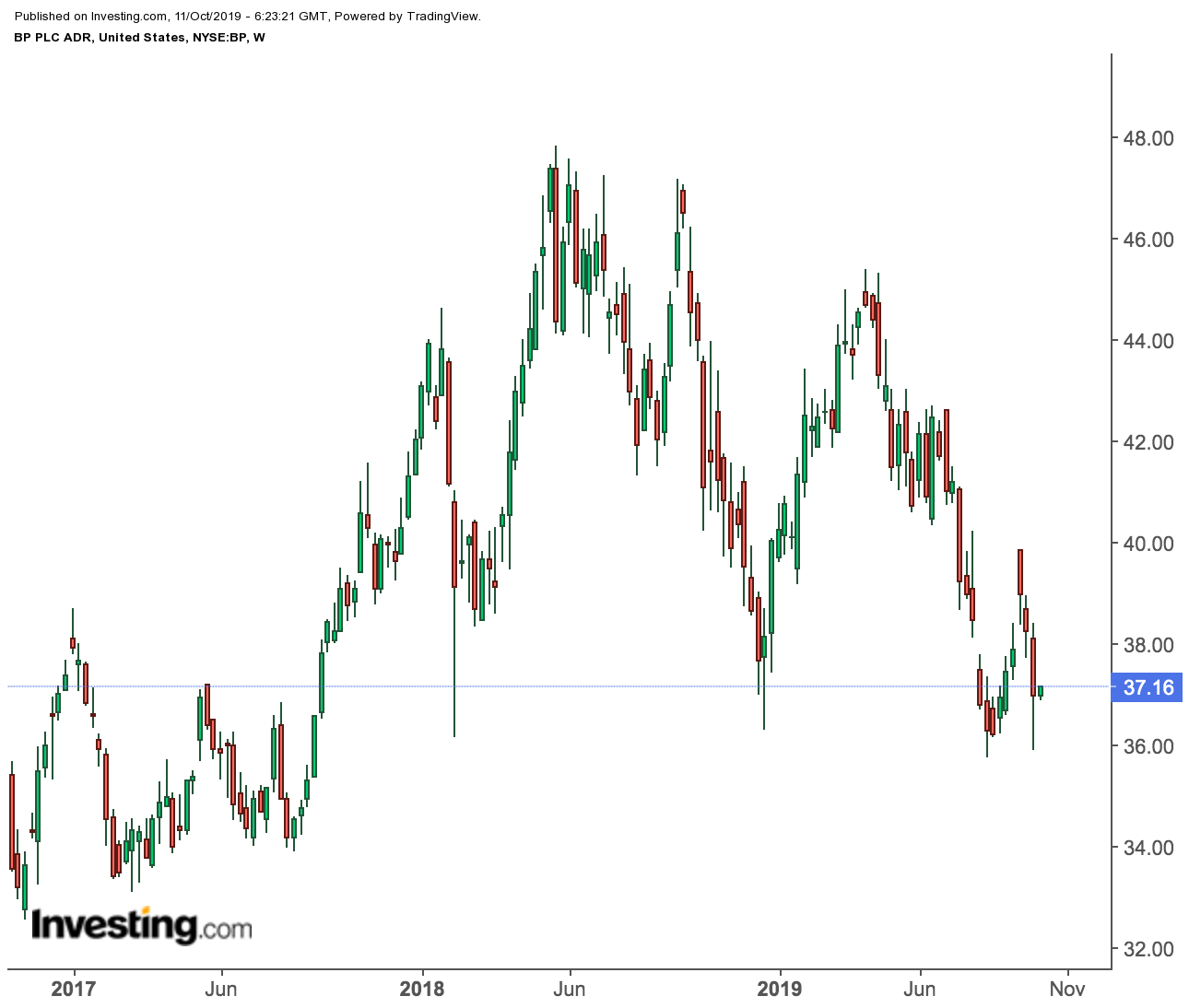 One of the main reasons BP remains cash-starved is the 2010’s Deepwater Horizon oil spill in the Gulf of Mexico. The company is still paying for that disaster and will continue to do so for a few more years.

During the second-quarter earnings season, BP beat expectations and increased its cash flow as higher production offset the effect of lower energy prices.

Cash flow from operations excluding payments related to the Gulf of Mexico oil spill rose 17% from a year earlier to $8.2 billion. On top of the payment for buying the U.S. fields, BP also paid about $1.4 billion in penalties associated with the 2010 catastrophe. BP will sell $4 billion to $5 billion of assets this year, part of a plan to complete $10 billion in divestments by 2020 and use the proceeds to reduce its debt ratios.

For long-term income investors, both companies offer a different appeal. If you're an oil bull, Shell’s juicy dividend yield is worth considering, especially as the company’s effort to repair its balance sheet is producing results. If oil prices improve from here, Shell has an attractive asset mix to produce robust cash flows with the potential for growing dividends.

BP, on the other hand, is pursuing many growth projects that position it to generate hefty free cash flow by 2021. In addition, the company has a new CEO Bernard Looney who might bring new ideas to reward investors once the company’s asset restructuring is over and the oil-spill related penalties are paid.