10 Important Developments for Investors to Watch in September 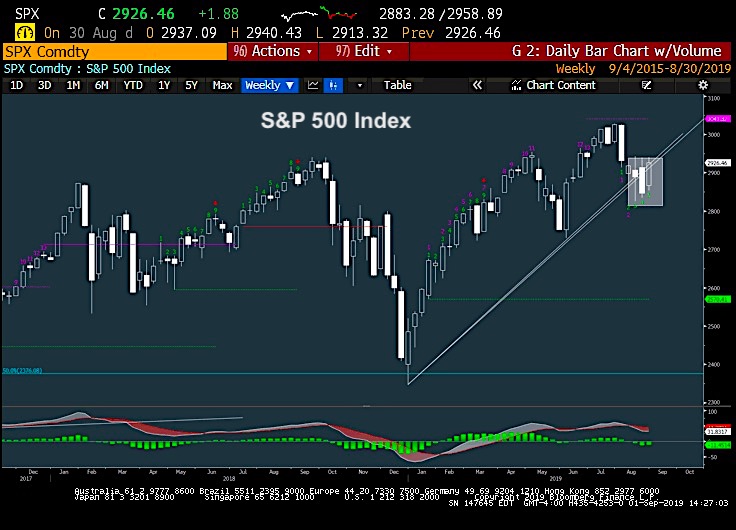 The S&P 500 Index continues to trade range-bound near-term as part of a larger uptrend from last December’s lows. Stock market momentum remains negatively sloped given the decline from late July.

We’ll need to see evidence of lows being broken before weighing in too negatively for September.

Meanwhile, the pattern for most of this year has shown highs being barely exceeded before being given back which has happened already three times this year.

My thinking is this could happen a fourth time, with SPX potentially moving into the sweet-spot for resistance at 3050-75 before failing again.

That said, here are 10 developments for investors to watch into September.

10 Important Stock Market Developments of this past week:

1). US Benchmark indices remain near-term range-bound in a consolidation pattern which has been ongoing for the last four weeks. Both upside and downside breakouts of this pattern have failed, so this will be important to watch.

2). Stock market momentum remains negatively sloped for US equity indices, on a weekly basis but has turned positive on daily charts given last week’s rally. Monthly momentum is also on the verge of turning positive for the first time this year, though at much lower levels than January 2018.

3). Last month’s weakest sectors, Energy, Financials, Industrials and Materials, were the strongest in the last 5 days as some definite stabilization occurred in these groups along with Transportation. However, markets continue to show a Defensive theme in the short run.

4). Equities and Treasury yields both showed some evidence of trying to turn higher last week, though a much sharper move in Equities than yields which remain within striking distance of lows.

5). Transportation and Financials made much needed reversals after showing real weakness throughout August. Of the 24 industries that make up the S&P GIC Level 2 groups, Transports finished third to last, down 6.2% for August. Banks were even worst, the second worst, down 7.85%. So this ability to turn higher was much needed.

6). Technology has begun to show more evidence of waning in its performance lately, ,turning in an August performance of -3.14% in S&P Information Technology index, in the bottom half of sector performance. While this group did rebound to gain 3.12% last week, halving its August decline, this was merely fifth best, and doesn’t appear to be moving up as sharply anymore. Trends of Tech vs SPX for now remain intact, but should be watched carefully.

7). US Dollar made a meaningful breakout of prior highs in Bloomberg Dollar index, carrying this to the highest levels in 2 years. Emerging markets have been stabilizing over last week, however and failed to turn down sharply with Dollar strength last week.

8). Precious metals look to have started to consolidate after their big period of outperformance. Given September’s positive seasonal bias for precious metals, it’s though that pullbacks prove minor only before turning back up.

9). Investor sentiment indicators remain largely negative, with AAII bears still showing a commanding 16 point lead over Bulls as of last Thursday’s poll release. While just one piece of the puzzle, this gels with other readings to suggest muted sentiment, which from a contrarian standpoint, is positive.

10). NYSE New lows showed a marked divergence with mid-August, as the 8/27 reading signaled a peak at 194 vs mid-August 8/14 reached 275. Thus important to note S&P had pulled back to make a 2nd retest into late August, yet stocks hitting new lows was much lower. Now that number has dropped further to just 44.